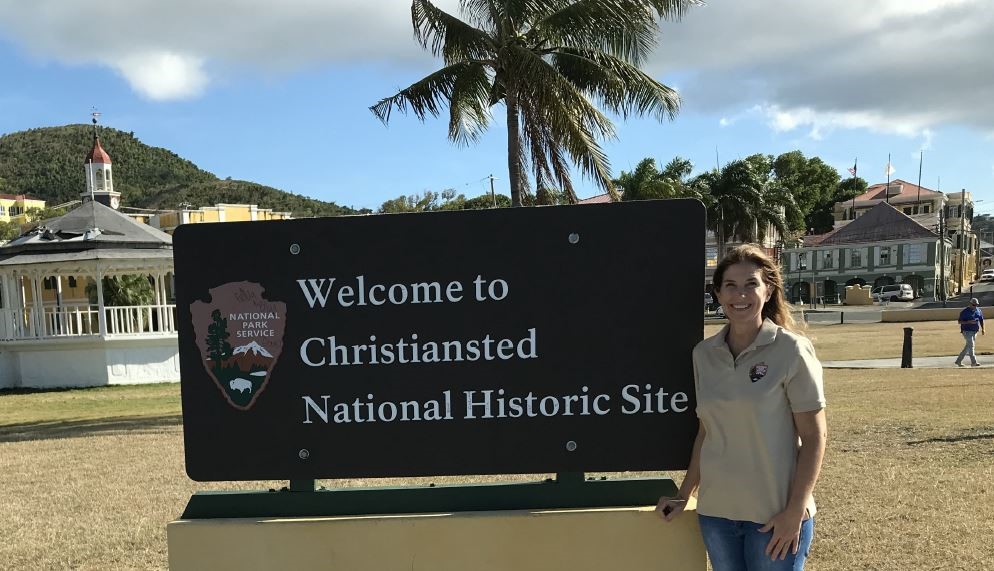 Vital has been waiting a long time to have the opportunity to host the NPS, RTCA (River, Trails & Conservation) Project Director, Jaime Doubek-Racine from the Regional Office in Sarasota Florida.  This technical assistance was awarded to the Virgin Islands Trail Alliance from the Department of the Interior after the hurricanes of 2017.  This is Jaime’s first visit to St. Croix and VITAL ensured that Jaime met with project leaders to discuss progress made and next steps but also expanded Jaime’s knowledge of the terrain through on-site visits.  This included a bike tour through the trails located on the Windsor Farm properties, led by Win Welsh, VITAL board member, as well as an off-road tour through Scenic Road led by VITAL’s President, Aaron Hutchins.  Alma Winkfield, VP of VITAL completed the tour along roadways where the Commissioner of Public Works has recently added multi-use pathways to the road project designs.

Jaime was on Island for 3 days (April 23-25) and attended several meetings during her stay.  Alma introduced the NPS, RTCA project director to the attendees at the St. Croix Community Recovery Meeting and gave an update to the attendees of VITAL’s work and progress made with the Nature Paths Projects, focusing on the recent 1 Million dollar FEMA announcement for the 50-Acre Public Park Project through the Hazard Mitigation Grant (a 2 Million dollar project) and the addition of the pathway designs to 4 major road projects on St. Croix.

Jaime and Alma also met with the Assist-Commissioner of the DPW, Denis Brow to start the process of identifying design concepts that can be added to road projects, with particular attention to the Northside Road as it will be the first road project to be released for construction.  Information sharing included the work being done in the two Historical Towns, led by CHANT in Frederiksted and The Christiansted Community Alliance in Christiansted, to review walkability needs.  The identified walkability needs can then be submitted to the DPW for inclusion in the two major town road design projects.

Jaime, while touring the Island also met with the NPS Acting Superintendent and the NPS Facility Chief along with the East End Marine Park Director.  New collaborative ideas were shared, and partnerships were made.

Even though this was Jaime’s initial visit to St. Croix she has been very effective in her work with VITAL and partners through constant communication since October 2017.  Jaime has assisted with identifying grant options, the writing of grants, the coordination of stakeholder meetings and conference call interaction and leadership.  Jaime with her team at the NPS, RTCA are currently working with VITAL to prepare an island-wide map.  The initial layer of the spine of pathways has been applied and subsequent layers will be added.  Some of these layers will include historical locations, parks and conservation lands, and primitive trail locations.  The work will continue for approximately 6 months until a usable map is created for on-line access and printable pamphlets.  This will become a source for bike paths and trails throughout the Island of St. Croix.

On April 24th, a workshop was held at the AARP Conference Room compliments of the AARP of the VI Director, Troy Schuster.  Troy updated the attendees regarding his continued support for VITAL’s community work, along with his work to promote livable communities for the Territory for all ages and the drafting of complete streets legislation.  Jaime reported that this kick-off meeting officially starts the 2-year technical assistance program from NPS, RTCA at no cost to the Territory. This assistance resulted from an application made by VITAL.  It was a competitive grant with the entire 50 States but during the review process VITALs application was identified to be the most complete, well thought-out, comprehensive plan ever submitted. Aaron Hutchins then presented the use of the downloadable App “STRAVA” and its various applications, illustrating  how it can advance the mapping of trails on St. Croix and serve as a database for monitoring usage and to identify new trail opportunities and needs.  Alma and Jaime worked together to present the overview of the progress made and the more recent developments regarding funding sources for “Smart Growth America” assistance to elevate community engagement and to promote optimal planning results and guidance.  They spoke of the upcoming non-profit opportunity that will be available to access funding for the “Planning of New Pathways”, from CDBG-DR through the HFA.  Pathways and pedestrian infrastructure inclusion into the design phase of road projects is now being expanded to identifying various options available and the importance of including work being done by collaborating partners as well as adding landscape designs so that the needs of all users are met.

Jaime gave an overview of some of the programs that could be available to the Island through the NPS, RTCA.  She strongly encouraged the completion of the work that was done to declare St. Croix a National Heritage Area.  This status comes with annual funding of approximately $400,000 that can support this community initiative.

Lunch was provided by the Leather Back Brewery and attendees took time to interact.  In the afternoon a mapping session took place.  Attendees gathered to draw primitive trail locations onto the NPS, RTCA generated concept map.  This map data traveled back to Sarasota with Jaime to update their GIS Database so that the primitive trail layer can be generated.

The next day Jaime, Aaron and Alma took an opportunity to appear on the Holland-Redfield morning show to the bring this Community Initiative to the people.  Bob White was a co-host for the broadcast, and we were thrilled to not only update the community but to have our work introduced by Bob White, one of the founders of the 14-Mile South Shore Bike Path.  A project that is a major component of the Pathway Concept Plan.   That afternoon Jaime and Alma were guests on the Neil Galloway Radio Show reaching out to a broader listening audience.

Despite all the work that has been done over the last 2 years, this community project is just starting to identify successes.  We have a long way to go and Jaime will continue to promote and assist with the initiative.  We are planning future meetings and a community engagement for November. We look forward to multiple opportunities to engage with the people and to encourage their inclusion and support. They are the biggest stakeholders.

VITAL has been thrilled to host Jaime’s visit to St. Croix and look forward to future visits.