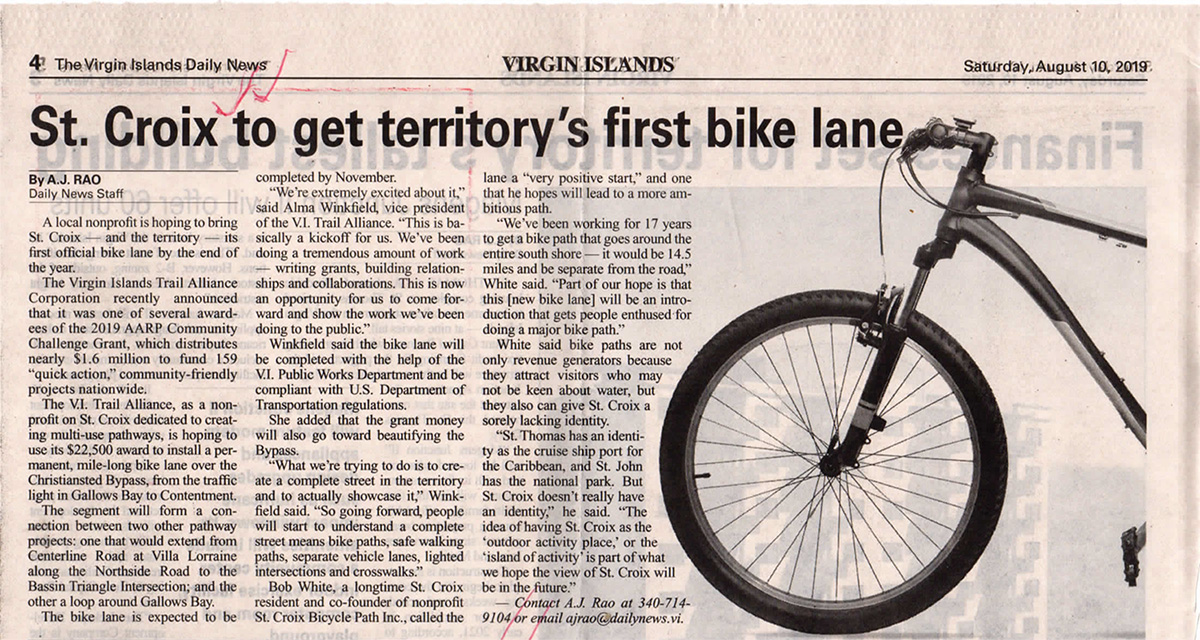 A local nonprofit is hoping to bring St. Croix and the territory its first official bike lane by the end of the year.

The Virgin Islands Trail Alliance Corporation recently announced that it was one of several awardees of the 2019 AARP Community Challenge Grant, which distributes nearly $1.6 million to fund 159 “quick action,” community-friendly projects nationwide.

The VI. Trail Alliance, as a non- profit on St. Croix dedicated to creat- ing multi-use pathways, is hoping to use its $22,500 award to install a permanent, mile-long bike lane over the Christiansted Bypass, from the traffic light in Gallows Bay to Contentment.

The segment will form a connection between two other pathway projects: one that would extend from Centerline Road at Villa Lorraine along the Northside Road to the Bassin Triangle Intersection, and the other a loop around Gallows Bay.

The bike lane is expected to be completed by November.

“We’re extremely excited about it,” said Alma Winkfield, vice president of the V.I. Trail Alliance. “This is ba- sically a kickoff for us. We’ve been doing a tremendous amount of work; writing grants, building relationships and collaborations. This is now an opportunity for us to come forward and show the work we’ve been doing to the public.”

Winkfield said the bike lane will be completed with the help of the VI. Public Works Department and be compliant with U.S. Department of Transportation regulations.

She added that the grant money will also go toward beautifying the Bypass.

“What we’re trying to do is to create a complete street in the territory and to actually showcase it,” Winkfield said. “So going forward, people will start to understand a complete street means bike paths, safe walking paths, separate vehicle lanes, lighted intersections and crosswalks.”

Bob White, a longtime St. Croix resident and co-founder of nonprofit St. Croix Bicycle Path Inc., called the lane a “very positive start,” and one that he hopes will lead to a more ambitious path.

“We’ve been working for 17 years to get a bike path that goes around the entire south shore – it would be 14.5 miles and be separate from the road,” White said. “Part of our hope is that this (new bike lane) will be an introduction that gets people enthused for doing a major bike path.”

White said bike paths are not only revenue generators because they attract visitors who may not be keen about water, but they also can give St. Croix a sorely lacking identity.

“St. Thomas has an identity as the cruise ship port for the Caribbean, and St. John has the national park. But St. Croix doesn’t really have an identity,” he said. “The idea of having St. Croix as the outdoor activity place,’ or the island of activity is part of what We hope the view of St. Croix will be in the future.”