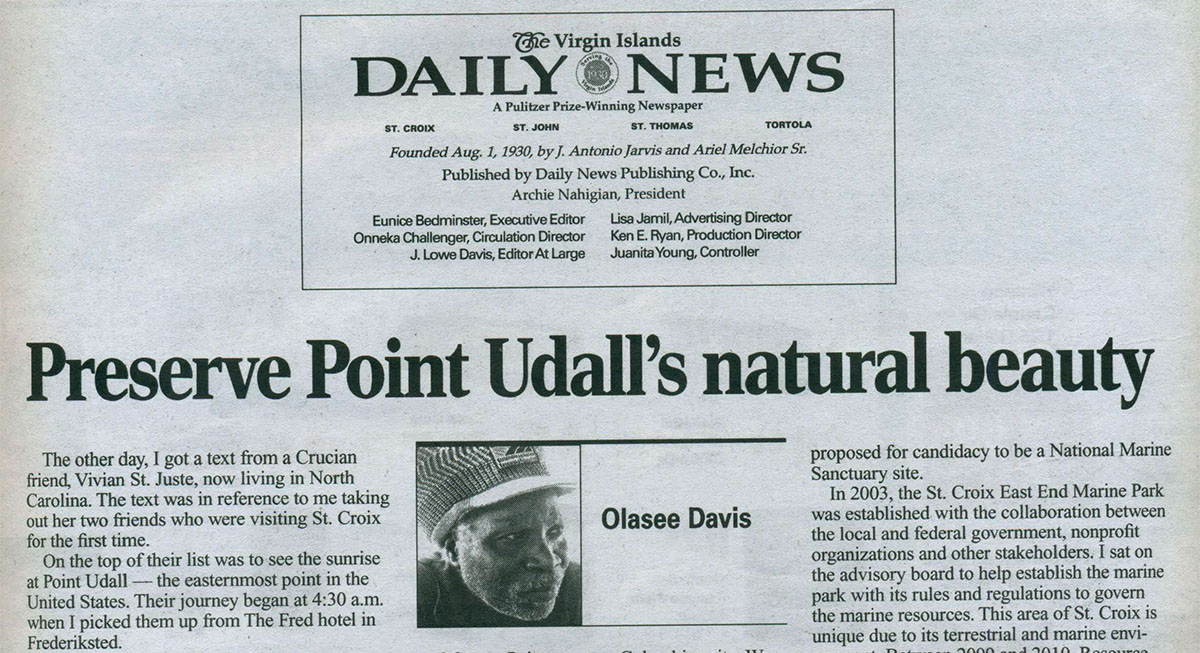 The other day, I got a text form a Crucian friend, Vivian St. Juste, now living in North Carolina.  The text was in reference to me taking out her two friends who were visiting St. Croix for the first time.

On the top of their list was to see the sunrise at Point Udall – the easternmost point in the United States.  Their journey began at 4:30 a.m. when I picked them up from The Fred hotel in Frederiksted.

We drove along the South Shore as I explained the history of the estates along the way and the beauty and magic of living on and island and its surrounding waters.  At last, we arrived at Point Udall, and it was still dark with billions of stars in the heaven.  It is hard to explain Point Udall if you have never experienced the darkness of a celestial environment.

It was a bit chilly, and one of the visitors put on a jacket. Can you imagine coming from North Carolina where the temperature can drop into the 20’s? The night temperature on St. Croix can drop to a chilly 60’s. At this time of year, we get our cold nights and cold days. These are our winter months where the sky is filled with cold air and waters the vegetation with morning dew.

At that wee morning hour, we were the only ones at Point Udall, waiting to see the sun rise form the eastern sky. Within a half hour or so, however, some 30 vehicles had shown up with occupants waiting to witness the first sunrise.

There’s a saying that patience is a virtue and good things come to those who wait. Well, we waited and waited until finally the reddish-orange ball of sun burst from the eastern sky.

At that moment, you’d have thought the sun was a celebrity as many people, armed with cellphones, took pictures skyward. My two guests loved the tranquility and the scenery of the coastal beaches, reefs and hills in the backdrop of Point Udall.

Point Udall is an eco-tourism treasure in the Virgin Islands. there are several hiking trails in the area from East End Bay, Isaac Bay, Horseshoe Bay, Jack Bay, Boiler Bay, Goat Hill and cotton Point – a pre-Columbian site. We explored the Boiler Bay Trail. The clear water in the shallow bay is ideal for snorkeling as it’s protected from large waves by reefs. The bay supports many reef fishes and different types of coral and algae. it is a nesting beach for the Green and Hawksbill sea turtles, both of which are endangered species.

On our way back up from Boiler Bay trail, someone was disintegrating the hillsides with a dirt Buggy. This is against the law. The East End shrub and dry forest wilderness is a protected area from the south to the north side of the Nature Preserve. The soil is very fragile and loose and can take decades to reseed itself with grass or plants.

The protection of the East End Nature Preserve didn’t come on its own. I had many years of sleepless nights working with residents, including schoolchildren, who fought politically to protect the East End of St. Croix. I testified at many public hearings and conducted hundreds of tours where people, both residents and visitors, over the years explored this beautiful part of our natural and cultural heritage.

The rugged hills on the East End were a refuge for runaway enslaved Africans. These slaves were known as Maroons. It was in these hills where slaves established a temporary camp against Danish authority until the 1820’s. in the 1960’s, the Department of Interior recommended to the local government for the East End to be a nature preserve. A decade later, East End was nominated as a Significant Natural Area. In 1982, the offshore waters surrounding East End bays, with its patch and fringing reefs, were proposed for candidacy to be a National marine Sanctuary site.

In 2003, the St. Croix East End Marine Park was established with the collaboration between the local and federal government, nonprofit organizations and other stakeholders. I sat on the advisory board to help establish the marine park with its rule sand regulations to govern the marine resources. This area of St. Croix is unique due to its terrestrial and marine environment. Between 2009 and 2010, Resource Conservation and Development Inc., of which I served as vice president, establish the parking lot near Point Udall particularly for individuals with disabilities to enjoy the site.

During the fall and early winter months, the territorial flower, ginger Thomas, blossoms with its golden chalices covering Sugarloaf and Goat Hills. These two hills, with an elevation of 675 feet high, form the central ridge between Knight Bay and Grapetree Bay on the south. If you’re lucky in the winter months, you could spot Humpback whales migrating off the coast of Point Udall to northern Caribbean islands.

Today, Point Udall’s historic landscape has become a tourist mecca for traveling guide magazines advertising St. Croix. To protect this jewel in the Caribbean sun, I recommend that DPNR’s environment law enforcement officers or rangers put up signs along the road to Point Udall that says: “No driving in the hills.” In addition, large rocks should be placed in the paths where the dirt buggies being driven in the are have resulted in environmental disturbances. It directly damages vegetation, disrupts animal life and considerably alters soil characteristics to include erosion. Point Udall belongs to all of us, so let’s help keep it environmentally sound by contacting DPNR or police whenever we come across anyone committing acts that can only serve to destroy its natural beauty for generations to come.

– Olasee Davis of St. Croix is an ecologist at the University of the Virgin Islands. He is active in Virgin Islands historical, cultural and environmental preservation.