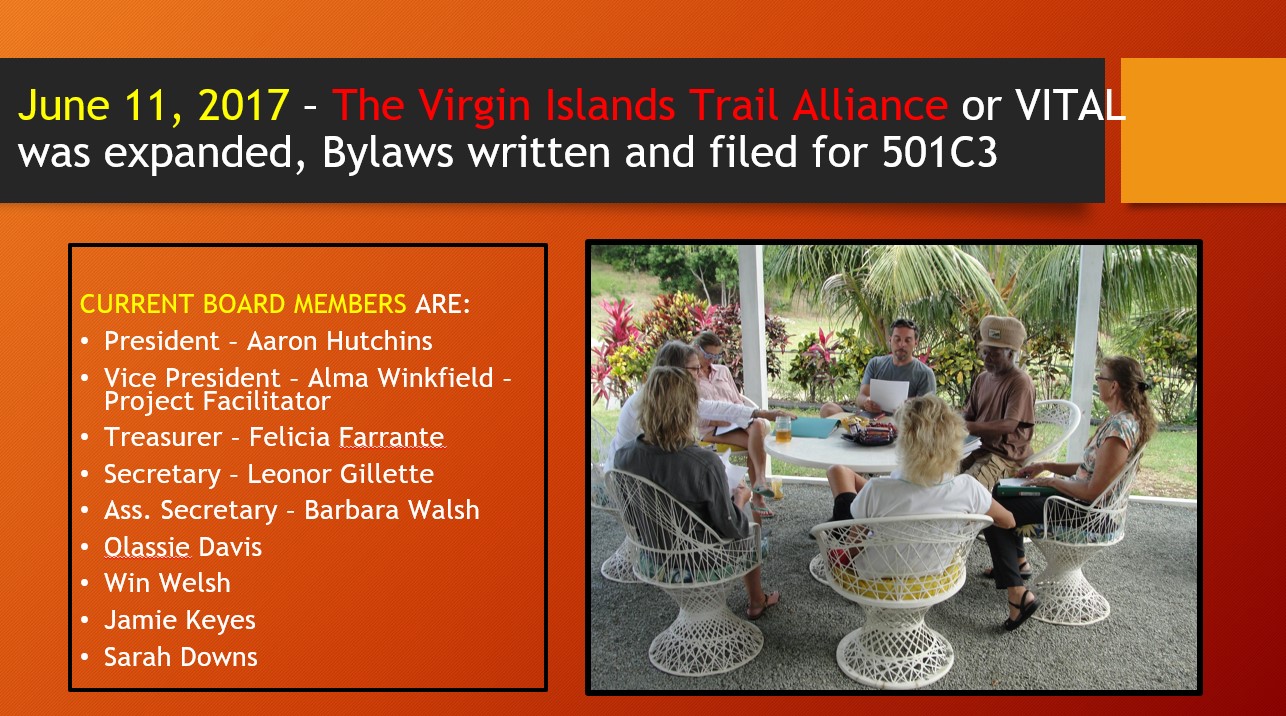 When the VI Trail Alliance was first created it was focused on the building of dirt trails throughout the Territory. The President and founder was Aaron Hutchins and his supporters were trail building enthusiasts such as Winn Welch. At a meeting that was held at the Seventh Day Adventist School in May 2017 this focus was expanded. The meeting was organized to bring like-minded people together who were already doing great work in isolation. The goal was to join forces in a community project that would create Pathways, Trails and Parks around St. Croix. Alma Winkfield had just opened the Sundial Park and had gained support from the Commissioner of Agriculture, Carlos Robles and the Senate Majority Leader, Neville James (who were in attendance). Alma had also met with the Cruzan Pathways Inc. who were the founders of the 14-mile South Shore Bike Path Project, Wallace Williams, John Harper, Larry Kupfer and Bob White (in attendance) as well as others. Peter Gajewski, an engineer with the DPW and project leader for several St. Croix projects was invited to address the attendees. Peter was able to give a current status of the South Shore Bike Path and the Spring Gut Federal Road Project that includes an 8 ft wide multi-use pathway. Alma Winkfield outlined her new project proposal of acquiring 50 acres of property for public use and conservation along the Spring Gut Rd. to be deeded to the Dept. of Agriculture. Alma also reported the opportunity to apply to the NPS, RTCA for Technical Assistance. It would require that a comprehensive plan be developed and the plan would need to gain wide-based community support. The concept was to gain support from external funding sources as current local funding was exhausted. If an application were successful it was anticipated that the technical support would assist with locating funding sources, assist to apply for the funding and assist with the designing process. This technical assistance could also generate a proposed concept map that outlines pathways, trails and parks on St. Croix at no cost to the community.

St. Croix became the focus because of the investment and work that had been completed by previous planners and government leaders, its size and the amount of available undeveloped space but the concept could be expanded to include the Territory.

Peter Gajewski revealed that the 14 Mile South Shore walk/bike Pathway was on the list of approved projects for the Territory but was unfunded. This project needed approx. $25,000 to complete the Archeology study, then approx. $300,000 for an engineer study and approx. 14 million to build it. Next he spoke of the 2.1 Mile Spring Gut Road Project with separate pathway. The project was only 1/3 funded. The estimated cost to build it was 22 Million and the DPW had secured 7 Million. The plan was to start building the road section from the Canegata Ball Park to just beyond the Seventh Day Adventist School and the project was slated to commence in 1 yrs. time.

At the conclusion of the meeting it was decided to make a formal application for Technical Assistance from the NPS, RTCA program a task to be led by Alma Winkfield. It was also decided that the VI Trail Alliance Corporation expand its vision and board to include Pathways and Parks. Aaron Hutchins would remain as president and Alma Winkfield would accept the vice president position at the next board meeting.

The board meeting was held May and work began on the application and on building the VI Trail Alliance Corporation into a strong non-profit that could handle the anticipated demands of this wide-based community initiative. Through the process VITAL board members met with the SBDA to gain assistance to create financial projections. Lawyers were consulted to expand and revise Corporate Articles and By laws. A contract was made with a CPA to ensure that the VI Trail Alliance was in full compliance and received a letter of good standing. In recognition of the need for donations to support our work and the possibility of grant funding VITAL applied and was accepted for Fiduciary assistance from the St. Croix Foundation and became a foundation project.

At the same time work was being done to gain community support from local and government leaders. On June 30th the Application for NPS, RTCA was submitted. Then the hurricanes of 2017 slowed the process but also gave new opportunities and in Oct. the Dept. of the Interior announced the award to the VI Trail Alliance Corp. for technical assistance from the NPS, RTCA.

Since that time a great deal of work has been done and some successes have been realized. Please refer to other news articles that announce our progress.

VITAL is proud to announce that the application for 501C3 has been filed.