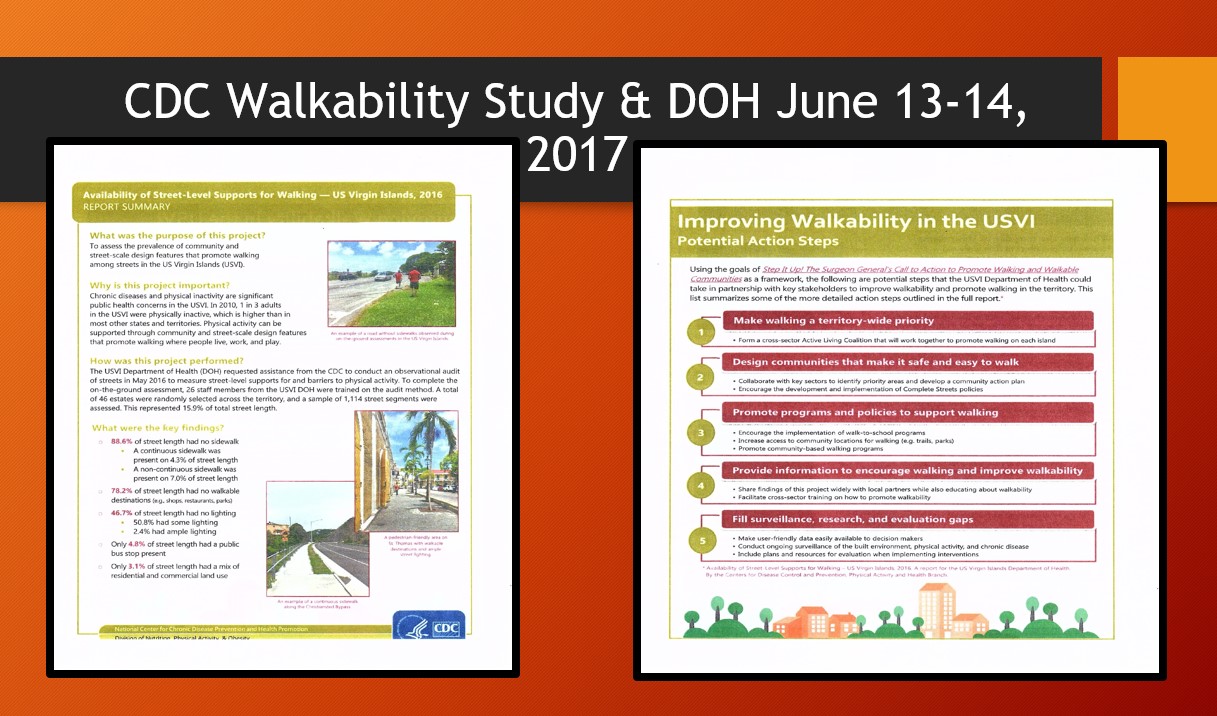 Vital became an active, dedicated and valued member of the St. Croix Walkability Team sponsored by the Commissioner of Health, Michelle Davis in conjunction with the CDC team.  At a 2-day intensive training the results of the territory-wide Walkability Survey were revealed thus creating the first reputable study of the over all condition of pedestrian supported infrastructure that currently exists.  The lack of sidewalks, bike paths, pedestrian crossings and supporting public transit were correlated with a declining health of residents in the Territory.  The study also documents the need for increasing the Pedestrian Infrastructure to reduce not only advanced chronic health issues in younger populations but also to reduce isolation of persons with restricted abilities in all age groups.

The training was lead by Mark Fenton from the CDC. His presentation summarized the results of the study as well as many of the issues that exist in the Territory. He made attendees aware that we are not alone in wanting and needing pedestrian infrastructure. Other communities with similar challenges such as Hawaii, have been successful to improve walkability on their Islands. Their success involved years of work, commitment and collaboration between government, private sector, non-profits and residents. They faced many issues such as the fear of change, cultural norms, doubt, lack of trust, limited funding and the list goes on, but by staying the coarse they are now proud of the changes that were made. The people they serve have increased quality of life through the improvements. There is still work to be done as it is a process.

We all began to realize that roadways were created to manage vehicle needs which resulted in unsafe walking and biking, minimal sidewalks, with few sidewalks leading to destinations. The Complete Streets Coalition through AARP and other organizations help communities to elevate this built environment. They work with local teams, community leaders and developers so that when roads and infrastructure are repaired or built that the needs of pedestrians and local transit be of equal consideration, to vehicle needs.

Many improvements can be made using low cost early action demonstrations such as improving pedestrian cross walks. With this in mind the Island Teams were challenged to design, test and implement an early action demonstration on each Island and were given $6,000 to assist with the task. The planning process began during this training and the CDC specialists committed their support through conference calls, to bring the teams together and assist the process.

The training was very successful as the lives of the participants have all been affected by the lack of pedestrian infrastructure. There was a great deal of interest and willingness to participate in the process. Team members are more aware of unsafe pedestrian needs as we travel through their day to day lives but now we see more than the problems. We now see solutions. We recognize our communities are unsafe by design and we too can make change.

VITAL looks forward to working with the Walkability Island Partners.